skip to main | skip to sidebar

Just when a major heat wave was sweeping the western parts of Europe, the weekend for the Swedish World Cup was rapidly approaching. Temperature forecast for the Friday in Holland was 36 degrees, in Sweden some 10 degrees less. Ivo and I decided to leave early. And leaving from Ivo’s place at 6 AM meant I had to leave at 5. Good thing I'm an early riser! Weather was excellent all the way up to Rinkaby, the venue of both competitions. But first we headed off straight to the Ahus pizzeria to watch Holland play the quarter finals soccer world champs against Brazil. We arrived just in time, some 10 minutes late after Brazil scored the first goal. The restaurant was packed with dutch flyers, I guess the locals never knew why a group of Dutch fans would drive all the way up to their pizzeria to watch the game! Soon the spirits rose after Holland started scoring. Great fun, and the quality of the pizzas added to the spirits. The fatigue of traveling vanished into thin air, and we would have plenty of that stuff the coming days!

We recharged our energy levels enough to check in our stuff in the barracks and do some flying. Upon arrival at the west side of the field, the fly off of the Swedish nationals was on its way. We tested some of our models. Thomas Weimer, who flew the small classes earlier that day, warned us for the tricky thermals. It later proved to be the understatement of the year. 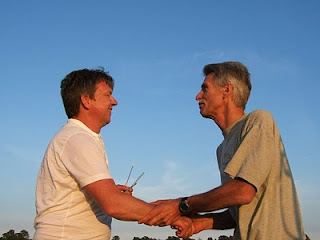 The next day dawned with blue skies and some 3 m/s wind, identical conditions as the day before. Thermals were present but could collapse in no time. To be honest, we never experienced anything like it. Even ace flyers like Findahl, Hellgren, Persson and Holbom had difficulties finding good air and keeping the model in thermals. Sub maxes started to appear on the scoreboard at a rapid pace. 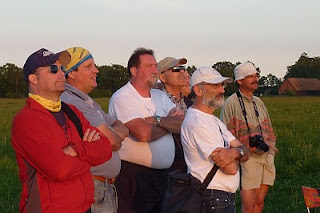 Must by fly off time!

Remarkable to see that some designs could handle the tricky thermals pretty well by keeping a tight turn, while other models just wondered about out of the good air. If there were any conditions to check wing warping and centering ability, this was the ultimate trial. Despite the tricky conditions, some managed to max out using utter concentration. Since the fly off was scheduled at 7.30pm, there was some time for lunch and rest. The first fly off round saw some good thermal activity, but only Antoon van Eldik and Jari Valo managed a solid max. F1B saw similar conditions with only Rosonoks en Stendal maxing. In F1C nobody had maxed out and Juri Roots showed the best climbs all day to secure a first spot, but with Pieter de Boer only 7 seconds behind. F1Q showed the first results of the rather liberal model specifications. Matti Lihtamo had worked hard over the past year to come up with a box full of extremely hot models. With a 1 kw motor it outclimbed even the best F1C model. When launched it accelerated so fast it was hard to catch it by camera. Ten seconds motor run would have been more than sufficient as the last 5 seconds of the 15 second motor run, the model got out of its climb pattern and needed about half the attained height to recover due to its low stability margin, still more than enough to beat Andreas Lindner. The second fly off in F1A saw different conditions. Thermal activity had died out almost completely. Jari decided to make a dash to the north east corner of the field where he could benefit from unobstructed upwind area and therefore turbulence free air. He towed patiently for good air. A great launch followed with a rock steady glide to beat Antoon with more than 2 minutes difference. F1B had a similar show down. Remarkable to see the flyers could bring and use their own timekeepers, which led to some commotion among the two contenders with a model being ‘followed’ which had already landed. The many binoculars pointing in the right direction sorted that out quickly and Hagen Stendal topped Rosonoks by (at least) 10 seconds. A rotation of timekeepers could have easily avoided this unrest. 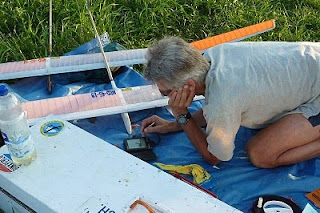 After this thrilling fly off, we retired to the barracks to eat some of our noodle fast dinners, which tasted remarkably well. Right after we finished the prize giving was on its way with the traditional cookies, soft drinks and (cool!) beers. The prizes were beautifully crafted blue glass sailing boats. That night, Germany was playing against Argentina and by the cheering noises through the barracks one could keep track of the scores.


The next day the movement of the trees announced a bit more wind compared to the day before, but the clear blue skies and wind direction were signs of another tricky day for this year’s Nordic Cup. And tricky it was: Kosonoshkin, Assmuss and Valo managed to make only one single max, Anders Persson (2008 winner) no max at all. Your’s truly was thrown out of good air in the very first round after having launched high in what appeared to be good lift. Antoon van Eldik was like the days before, going strong for another clean score, but bad air spoiled his chances in the very last flight: 52 seconds. 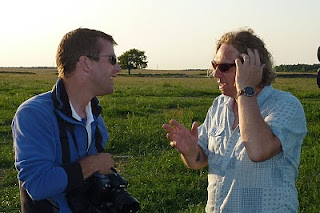 The downdrafts were particularly vicious. The one-liner of this weekend came from Michail Kosonoshkin: “Hey Antoon, I make only one max today, but I still beat you!” This summarized the tricky conditions. Ivo Kreetz, who damaged his Baldrick on a row of rocks the day before, had to switch to his old but reliable ‘service canon’, a short stubby model with low cambered thick airfoil. This model could handle the conditions particularly well, by sticking to the thermal like no other model. All flights were very high and one could see his confidence growing by the round. After the last round, only two maxed out, Ivo and Petri Kuikka. The F1B models could apparently handle the condition lots better with 9 (!!) flyers maxing out, almost half of the competitors attending. Also in F1C 3 out of 4 maxed out and it was again Roots beating Pieter. In F1Q it was once again Matti Lihtamo, but this time his opponent was Ron Assmuss who did somewhat better compared to his F1A flights. The rest, food, rest and fly off schedule was identical to the day before, although the wind was some 1 m/s stronger. Shortly before the fly off we learned that Anselmo Zeri had passed away. This gave Ivo and me a big dent in our spirits, but decided that Anselmo wouldn’t have it any other way than winning this event. The F1A fly off was soon on its way. The starting position was close to the south east tree line which marked the very edge of the field. Kuika moved away from Ivo and was battling the turbulence, circling his model dangerously close to the ground at times. Thermals were absent, and Ivo made a good launch to some 75 meters, a couple of meters more than Petri. This extra altitude made the 16 seconds difference for Ivo to win. Ivo’s flight of 220 seconds traveled almost the full length of the field. Quick math yielded a 6 m/s wind speed.


At the prize giving we had one minute of silence in memory of Anselmo Zeri who was a frequent visitor at the Swedish and Nordic cup. The prizes of this event were not the common trophies, but traditionally crafted ceramic dishes made by the wife of Tom Oxager.


This year’s events were blessed with fine weather but the trickiest thermal conditions ever seen. Many were getting desperate and started doubting either their flying skills, model quality or both. Judging the flight times on the result lists it was better to keep the trim of the models untouched, erase the downdrafts from memory and reboot the flying skills for the next competition. The memories of Anselmo however, will for ever stay with us….. 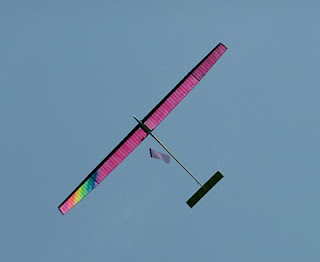 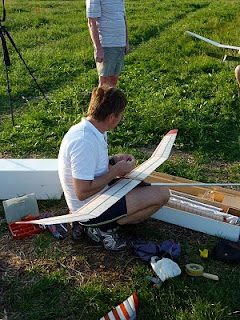 Jari with Tchop flapper, he didn't use it in competition. 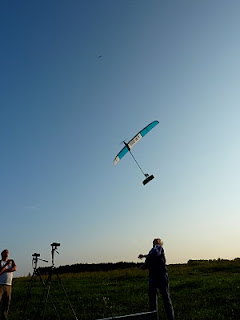 Lihtamo's hottest F1Q in existence with 1kw motor. Catching this rocket on picture was more luck than anything.

Information on the most recent issue may be viewed at this link
Posted by Chris Stoddart at 11:51 AM

Thanks for visiting the Free Flight Quarterly blog. Free Flight Quarterly comes from Australia and is published quarterly in January, April, July and October. We will be posting news about the magazine and the activities of our community of readers. From time to time you will find here examples of articles appearing in the magazine and helpful links to sections of our website, www.freeflightquarterly.com .